This is the second of six paranormal experiences that have occurred to me in Los Angeles.  The location: 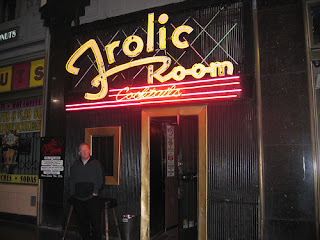 The Frolic Room, at 6245 Hollywood Boulevard, is a fantastic dive bar--one of my favorites.  The photo of me on the home page of my website was taken inside the Frolic Room.  It's also a favorite hangout of Kane Pryce, the protagonist of my novel Soul Trapper.  Kane describes the Frolic Room in Chapter Six like this:

I lead Eva to my favorite watering hole, The Frolic Room, at and Vine.  You can’t miss it.  It’s the best neon sign in the city, shining like a beacon for drinkers in this of shattered dreams.  It’s old and grungy and so full of weird energy that I think it has a pulse.  Inside, it’s a small space—forty feet long, ten feet wide—dimly lit by retro saucer-shaped lamps.  Smells as musty as your grandpap’s underwear drawer.  An Al Hirschfeld mural—depicting caricatures of legends—stretches along back wall.  The crowd, a dozen or two drinkers when the place is packed, is always a can of mixed nuts.  You’re liable to see a skid row drunk next to a agent next to washed-up rocker rubbing shoulders with a transvestite hooker taking a break between blow jobs.  If the bar is mostly empty, you’ll feel the presence of spirits.  You might even see a face in the mirror behind the bar if you mix the right amount of booze with the right level of concentration.
Did I mention I pretty much hate everything?  But I love the Frolic Room.  I can stagger home and take a D.U.I. out of the equation.  Plus, it has an old-school jukebox, not one of these bullshit broadband versions housing an infinite well of music.  This one has a little something for every character that walks through the door.  Though I’ve been coming here for years, that jukebox still manages to surprise me.

Sadly, the jukebox I so lovingly wrote about just went digital.  Broke my heart.  It really used to be the greatest jukebox in town.

And the sentence about seeing a face in the mirror.  That sentence is in a work of fiction, but it's based on something that really happened to me in 1999.  I was sitting at the bar in the Frolic Room with a buddy.  It was early in the night; I wasn't drunk (yet).  No hallucinogenics in my system--honest.  After slugging the jukebox and making my selections, I returned to my barstool and glanced into the mirror that runs the length of the bar.  It wasn't my reflection looking back.  The fellow staring at me was in his fifties--a chubby-faced, jowly guy with a thick bushy mustache and bald dome with a ring of hair.  I was stunned, caught totally off guard.  When I blinked twice and looked back the image was gone; I was looking at myself again.  Ghost?  Glimpse of a past life?  Who knows, but it happened.  I can still see that face.

The Frolic Room is a place where I really do feel the presence of spirits.  Good spirits and bad spirits.  A lot has happened in this tiny little gin mill, including the mysterious and grisly death of the bar's doorman in April 2010.  Shortly after closing time he was found dead in the camped vestibule of the bar, bleeding from the ears.  Did he faint, fall, and hit his head?  Some think so, including a few of the detectives working the case.  Was he struck in the head with a blunt object?  Some believe so, including members  of the doorman's family and more than one doctor that examined him.  Was he attacked by an angry patron with whom he had a confrontation with earlier that night?  No one knows.  Police have found no witnesses.  The case is still under investigation.