Since the events in my recently released novel, Soul Trapper, occur in L.A. and center on ghosts and the paranormal, I thought I'd share a few of my own ghost stories and tell you about the locations where they occurred.  This is the first of six paranormal experiences I'll share from my years in the city of angels. 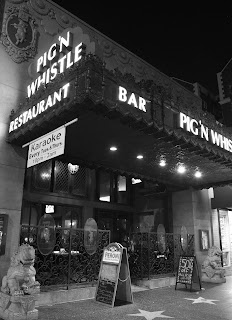 The Pig and Whistle, dating back to 1927, is an old Hollywood gem.   A dim, well-stocked bar, cozy booths, rich mahogany woodwork, and a mesmerizing vaulted ceiling make it unforgettable setting.

It's also the location of one of my most recent paranormal experiences.  Following a meeting I had in October 2010, I stopped into the Pig N' Whistle for a late lunch.  By mid-afternoon, the place was almost empty.  Just before I left, I went in search of the men's room in the basement.  Though I was completely alone down there, I had the distinct feeling that someone was hiding in the stairwell.  While I was washing my hands, someone tapped me on the shoulder--hard, aggressively.  My first reaction was that I was being mugged.  I shot around in an instant and tried to grab the arm that just touched me.  No one was there.

I went back to the bar and shared my story with the bartender. She told me I wasn't the only person who experienced the feeling of being touched in that basement.
Posted by F.J. Lennon at 11:12 PM